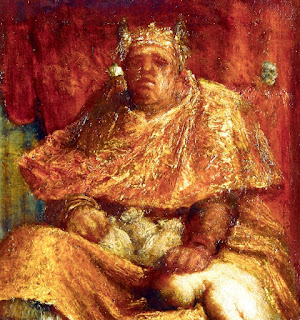 “What is good? All that enhances the feeling of power, the will to power, and the power itself in man. What is bad? All that proceeds from weakness. What is happiness? The feeling that power is increasing— that resistance has been overcome.

Not contentment, but more power; not peace at any price, but war; not virtue, but competence. The first principle of our humanism is that the weak and the failures shall perish. And they ought to be helped to perish.”

(Jesse’s Cafe Americain) There is a range in human behaviours. There may be a baseline, but not all are the same.

And this is why theories that assume that everyone has a basic world outlook that is the same as you, that all people have a natural desire to be friendly, helpful, and sharing falter out of either a good nature or from a good maximizing, selflessly reasoning behaviour, falter so badly when applied to the real world.

When a society fails to restrain some of the worst behaviours of those who prey on others in terms of power or money, their example serves to bring out the worst in a much larger subset of the population that is marginally sociopathic, weak in their human values.

Bad behaviour breeds bad behaviour, and those who profit by it find ways to justify this through self-serving social and political theories, to themselves and to others.

And the pity is that people who have this variation in their character, either through nature or nutrure or both, as in the case of psychopaths and sociopaths, are naturally attracted to high profile positions of power.

If they ever speak frankly about their view of things amongst their confidants, the normal person would be stunned by their distorted world view, often writing off large segments of the population as unworthy and disposable, for the most part because they impede their desires, although they will often ascribe it to some irreparable defect in these others, making them unworthy of life.

Psychopaths breed and nurture sociopaths, imitators who are able to extinguish their own empathy and remorse through ideology and excess including violence, sex, and drugs. What would you do to protect your children from people like this? Throughout history, people have banded together in order to establish and maintain the rule of law against the tyranny of a few.

This is why romantic notions about markets and societies without law and transparent regulation are so harmful. They turn the power of the markets and the laws over to the least scrupulous and self-controlled in a society. This is why any social system without checks and balances, without transparency and restraints, will eventually deteriorate into a dysfunctional system of self-interest and looting.

People are not perfectly rational angels. It is hard to believe that one must say that to an adult audience, but ideology and conditioning can make people blind to their own faults. ‘Men go mad in herds, but come back to their senses, one at a time.’

Society is generally based on consumption,  production, and cooperation.  A system that has become tainted by the sickness of the disordered mind and soul is based on debt, coercion and extraction, serving only money, power, and itself.

What then are we to do?

Do not spend your time trying to look into the minds and hearts of others at a distance, saying this one or that one is clearly disordered and evil, calling them out for it. Rather, look first into your own imperfectly human heart, and find the fear, selfishness, envy and greed within.

And with open eyes, having seen this inhuman behaviour for what it is, acknowledge it, bring it under your control, subdue it and extinguish it by having remorse for past wrongs, and a sincere desire to act up to your light, more fully and wholly human, in the future.

Put more simply in the words that echo down the long halls of history, see your sins, acknowledge them, repent and ask for forgiveness, ask for the strength to act up to your light, and then go and sin no more. For if the seeds of wickedness and inhuman behaviour are stilled within you, then the madness that roams the world like a roaring lion will not find a way to steal your humanity and your heart.

And that time is coming, always and again.

0 119
The Metaverse: A great leap forward or Digital Dystopia?

1 370
The Mass Psychology of Totalitarianism

0 85
Technocracy And The Politics Of Big Data Dominance