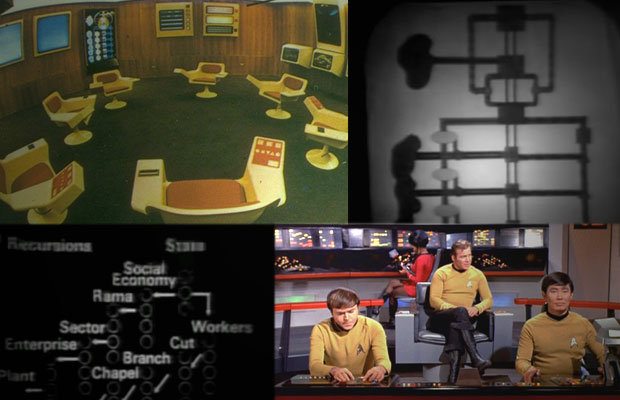 (Aaron Dykes) The metaphor of society run by the levers of the machine, and the “system” that operates government and industry became much more literal in the post-war age of cybernetics.

Mathematics and other related fields have got all that behavior down to a somewhat exact science. The use of algorithms and feed back mechanisms to track behavior has allowed the social scientist to manage people in mass, in often very subtle yet deeply meaningful ways.

Here, Stafford Beer explains a concept outlined by Ross Ashby about the natural order and tendencies of systems – including some obvious pitfalls that are being played out today.:

Stafford Beer explains the Law of Requisite Variety, also called Ashby’s Law in honor of W.Ross Ashby his cybernetician friend. Beers ponders on the dangers of the inability to foresee the consequences of the variety explosion due to come in the future as everybody wants more and more autonomy.

In political and social terms, this means there must be enough inputs for members to give their feedback in order for the system to correct to a state that is more “fair” and “democratic” and “inclusive,” etc.

Using automation and goal directing to manage and control all sectors of society, or the entire machine itself, cybernetics creates a closed loop for corrective action that is automated, and in which man has little direct input.

When there is not a proper balance of power, and there are not meaningful channels of communication for dissent, and the exercise of liberty, then tyranny is inevitable. When the system is not properly configured, the injustice of the power of the state becomes even greater.

The same is true for economics, where the draconian policies of controlling and manipulating, especially through tightening, of the the monetary supply and the price of business already created a rigged game. Today, though, high speed, automatic trades based on complex computer algorithms dominate the marketplace and create an arena that is programmed to let insiders win at the expense of everyone else.

It is an entirely different sense of order out of chaos – which indeed has been anticipated and modeled by mathematicians and computer engineers for more than half a century.

Stafford Beer: A Computer Runs Chile; A Trekkie Geeks Out

Stafford Beer was a leading cybernetician from the UK who was invited to run the Chilean government – using cybernetic machine communiques – during the short-lived reign of President Salvador Allende. After being elected openly and fairly in 1970, Allende was removed by a CIA coup on September 11, 1973 – plotted with then-National Security Advisor Henry Kissinger.

Allende was a Marxist and socialist who nationalized industry and collectivized social interaction with government.

In a video address explaining how cybernetics works in government, Beer expresses his genuine respect for Allende and his policies, and obviously felt he was sincere. He believed a just government was being erected – even in the hands of a machine.

Many of these sentiments are well placed.

In the first video (above), Beer makes clear that self-sufficient and free people is the goal, and indeed it should be.

In the end, Stafford Beer only had a couple of short years, and the promise of political progress – flawed or not – was cut short and went unfulfilled (though Beer continued his work in the UK and other Latin American countries).

The consultant, Stafford Beer, had been brought in by Chile’s top planners to help guide the country down what Salvador Allende, its democratically elected Marxist leader, was calling “the Chilean road to socialism.” Beer was a leading theorist of cybernetics—a discipline born of midcentury efforts to understand the role of communication in controlling social, biological, and technical systems. Chile’s government had a lot to control: Allende, who took office in November of 1970, had swiftly nationalized the country’s key industries, and he promised “worker participation” in the planning process. Beer’s mission was to deliver a hypermodern information system that would make this possible, and so bring socialism into the computer age. The system he devised had a gleaming, sci-fi name: Project Cybersyn.

Beer was an unlikely savior for socialism. He had served as an executive with United Steel […] He had a lavish life style […] To convince workers that cybernetics in the service of the command economy could offer the best of socialism, a certain amount of reassurance was in order. In addition to folk music, there were plans for cybernetic-themed murals in the factories, and for instructional cartoons and movies. Mistrust remained. “Chile Run by Computer,” a January, 1973, headline in the Observer announced, shaping the reception of Beer’s plan in Britain.

At the center of Project Cybersyn (for “cybernetics synergy”) was the Operations Room, where cybernetically sound decisions about the economy were to be made.Those seated in the op room would review critical highlights—helpfully summarized with up and down arrows—from a real-time feed of factory data from around the country. The prototype op room was built in downtown Santiago, in the interior courtyard of a building occupied by the national telecom company. It was a hexagonal space, thirty-three feet in diameter, accommodating seven white fibreglass swivel chairs with orange cushions and, on the walls, futuristic screens. Tables and paper were banned. Beer was building the future, and it had to look like the future.

[…]One wall was reserved for Project Cyberfolk, an ambitious effort to track the real-time happiness of the entire Chilean nation in response to decisions made in the op room. Beer built a device that would enable the country’s citizens, from their living rooms, to move a pointer on a voltmeter-like dial that indicated moods ranging from extreme unhappiness to complete bliss. The plan was to connect these devices to a network—it would ride on the existing TV networks—so that the total national happiness at any moment in time could be determined. The algedonic meter, as the device was called (from the Greek algos, “pain,” and hedone, “pleasure”), would measure only raw pleasure-or-pain reactions to show whether government policies were working.
In many respects, Beer’s cybernetic dream has finally come true [in the current age of Big Data]: the virtue of collecting and analyzing information in real time is an article of faith shared by corporations and governments alike.

Beer took the metaphor of the body politic seriously in crafting his cybernetics model for Chile – as a means of managing an entire country – and even had a control room with Star Trek-inspired chairs.

However, a genius mind working among the “game makers” of our world cannot be so naive as to think that a pure democracy can be operated cheerfully by a cybernetic government.

Once the powers are created to control the masses, and force everyone (or even most) onto a centrally-controlled, automated system, the abuse of rights is inevitable.

The system is geared towards goals for the “greater good” in a collectivist society – and individual needs are routinely seen as “noise in the signal”, and interference with the goal. Vaccine mandates, forced quarantines, mandatory education, federal income tax, social security, health care systems, and more have been forced onto society without meaningful choice, and with tremendous levels of propaganda from establishment media outlets. And that is when the system is operating in neutral.

In the wrong hands, Stafford Beer’s system could make police states, austerity and a firm iron grip operate at the height of efficiency. This was seen in pre-cybernetics days with Stalin, who ruled ruthlessly and absolutely (and who notoriously demanded Soviet cybernetics be rejected on grounds of being ‘imperialist’). After his death, it took over Soviet management.

During the height of cybernetics, it was East German Stasi who used cybernetics to direct a hyper-efficient surveillance state model that repressed absolutely everyone, induced fear of arousing suspicion and compelling neighbors and family members to snitch out their close companions for crimes against the state.

Collectivism is Tyranny, and the Destruction of the Individual

Whether in a flourishing modern technological democracy or a tight-sealed super state, cybernetics ultimately results in “computeriz[ing] our political decision-making” leaving individuality and human freedom more and more on the margins.

Historian Carroll Quigley foresaw the dehumanizing effects of technology in the management of society – and properly warned that it would strip freedom down to narrow confines where a few options exist, but only those which are compatible and acceptable to the system itself.

On p. 866 in Tragedy and Hope, he sums up the problem of collectivism – which is happening already in the United States – where political candidates, the economy and a vast bureaucracy of social services had reduced man to a number – hardly the goal of a “free” society: 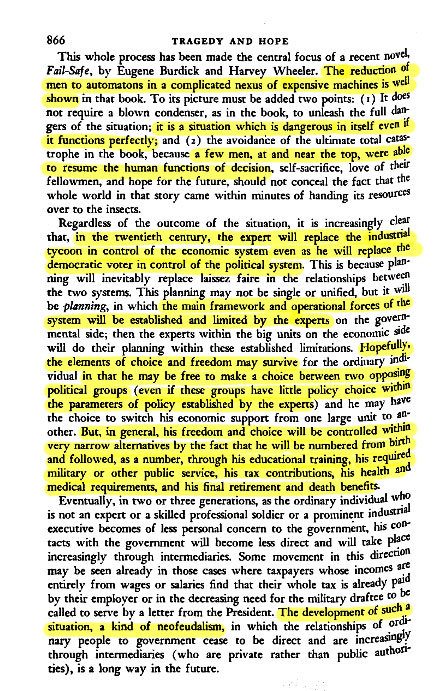 In effect, average Americans have been reduced to mere serfs, and will be increasingly shown it as technology takes over everything.

Only non-compliance with the system, and disengagement from the machine that runs it, can result in greater freedom. Everything else is organized tyranny – and there may well be many positive trade offs and conveniences – but engaging the system means handing over an equal amount of control.

The WEF and the Pandemic

How to Neutralize Potential Damage from mRNA Vaccines

Why Do Some People Support Tyranny While Others Defy It?

The Metaverse: A great leap forward or Digital Dystopia?

Cult Involvement in the Attempt to Destroy Democracy

TV is Mind Control through Physiological and Psychological Manipulation

How To Brainwash A Nation