Breaking News
The State Now Owns Your Car – And Your House? — Bugging Out and Emergency Preparedness Father, Whose Dr. Said the Vaccine Could Kill Him, Denied Life-Saving Care For Not Taking Covid Jab 5G Will Enable Nightmare Surveillance Grid That Humans Won’t Be Able To Opt Out Of Planetary Genetic Overwrite: The Big Picture Behind COVID mRNA Vaccines YOU HAVE POWER TO TREAD ON THE HEAD OF THE SERPENT BOMBSHELL: NURSE TESTIFIES THAT NONE OF THE MILLIONS OF COVID PATIENTS DIED FROM COVID… Pfizer board member says it’s time to end COVID mask, vaccine mandates Mass surveillance of K12 students, corruption, and child trafficking: A discussion w/Brian Weaver
TwitterFacebookEmail

Every war has its casualties. The “official” count of 19,249 reported deaths from COVID injections is likely understated by 90%, meaning that the actual death count could be approaching 200,000 in less than one year. In comparison, the Vietnam war lasted 20 years and saw only 47,434 U.S. soldiers die. The magnitude of today’s casualties is well into the genocide category. 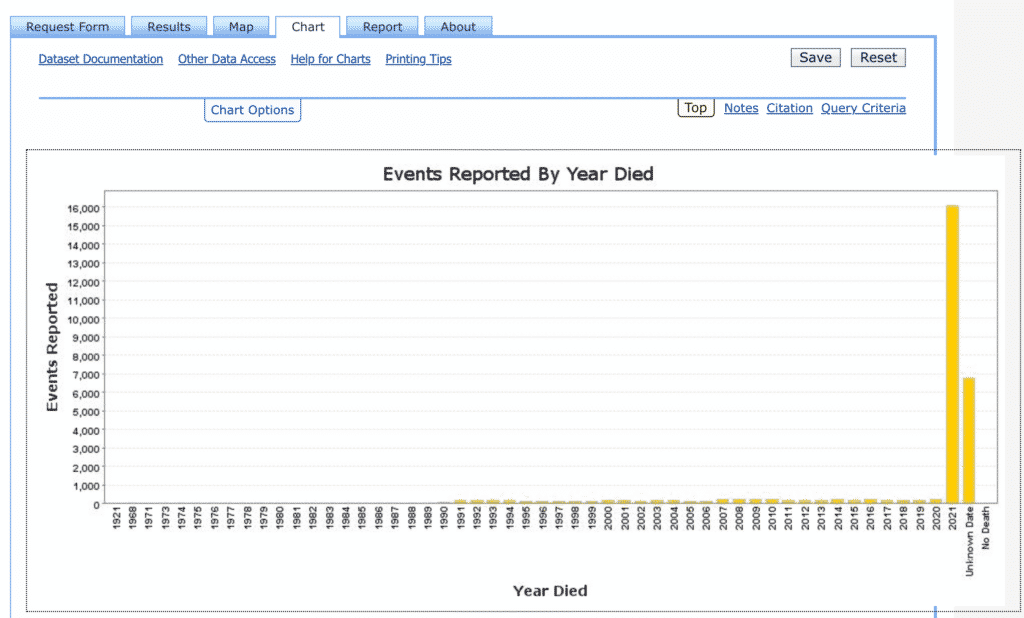 VAERS data started being collected in 1991. I personally generated this chart showing all vaccine-related deaths on the https://wonder.cdc.gov/ web site. These are NOT COVID deaths, but only vaccine deaths!

And yet… the Executive Branch continues the fear-mongering propaganda that every American must be injected with the experimental mRNA shots. Both political parties are equally culpable; remember, it was the Trump Administration that orchestrated Operation Warp Speed and promised shot availability in record time. This only points out that the source of attack is greater than and independent from, either party ⁃ TN Editor

(Megan Redshaw,  The Defender) VAERS data released Monday by the Centers for Disease Control and Prevention included a total of 913,268 reports of adverse events from all age groups following COVID vaccines, including 19,249 deaths and 143,395 serious injuries between Dec. 14, 2020, and Nov. 19, 2021.

The Centers for Disease Control and Prevention released new data late Monday showing a total of 913,268 adverse events following COVID vaccines were reported between Dec. 14, 2020, and Nov. 19, 2021, to the Vaccine Adverse Event Reporting System (VAERS). VAERS is the primary government-funded system for reporting adverse vaccine reactions in the U.S.

Foreign reports are reports received by U.S. manufacturers from their foreign subsidiaries. Under U.S. Food and Drug Administration regulations, if a manufacturer is notified of a foreign case report that describes an event that is both serious and does not appear on the product’s labeling, the manufacturer is required to submit the report to VAERS. 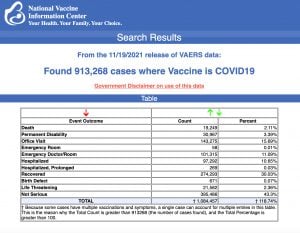 Every Friday, VAERS publishes vaccine injury reports received as of a specified date. Reports submitted to VAERS require further investigation before a causal relationship can be confirmed. Historically, VAERS has been shown to report only 1% of actual vaccine adverse events.

The most recent death involves a 16-year-old girl from Georgia (VAERS I.D. 1865389) who died reportedly from a heart condition and multi-organ failure two days after receiving Pfizer’s COVID vaccine.

Man with natural immunity forced to get vaccinated against COVID to remain on lung transplant list, dies after second dose of Moderna

Bobby Bolin, a 49-year-old Texas man who previously had COVID, was told he would have to get vaccinated against COVID in order to be eligible for a double-lung transplant, even though he had already recovered from the virus.

49-year-old Texas man who recovered from COVID—but was required to be fully vaccinated against virus before being approved for a life-saving lung transplant—died when he developed a pulmonary embolism and heart issues after his second Moderna vaccine.https://t.co/YHCwKb2lIp

After his second Moderna shot, received on April 17, Bolin developed a pulmonary embolism and atrial fibrillation — a heart condition characterized by an irregular heartbeat, shortness of breath, chest pain and extreme fatigue. His health rapidly deteriorated and he passed away Aug. 20, before receiving new lungs.

In an exclusive interview with The Defender, his wife, Amy Bolin, said there was no reason her husband should have been forced to get the vaccine in order to receive new lungs, but unfortunately, he was desperate and very sick.

Amy said she didn’t know what timeline her husband had with his organs, but she saw a complete change in him over four months’ time and doesn’t want others to face the same things they experienced.

0 68
Pilots Issue Warning Against Vaxx Mandates: “We have all the Control – Aircraft Will Stop Moving”