(Daniel Horowitz, The Blaze) Uttar Pradesh might sound obscure to most Americans, but it is the most populated state in India, with urban areas that rival the most densely populated cities in the U.S. Yet, miraculously, despite housing a population of 240 million people, this northern state has been averaging only 24 cases and 0-2 deaths per day in recent months. Despite its size — roughly 73% of the U.S. population — it ranked dead last in cases per capita last week among India’s 36 states. What gives?

The answer likely lies in the 10-letter “I-word” that you are not allowed to mention on social media: ivermectin. Evidently, the global medical junta doesn’t like the over 60 studies vouching for the efficacy of ivermectin against SARS-CoV-2, especially when used early, but there is something better than a study: pure reality of lived experience.

Last year, the northern state of Uttar Pradesh began dispensing ivermectin liberally and encouraging people to take it early on and even preventively. As Trial Site News reported earlier this year, “By the end of 2020, Uttar Pradesh — which distributed free ivermectin for home care — had the second-lowest fatality rate in India at 0.26 per 100,000 residents in December. Only the state of Bihar, with 128 million residents, was lower, and it, too, recommends ivermectin.” 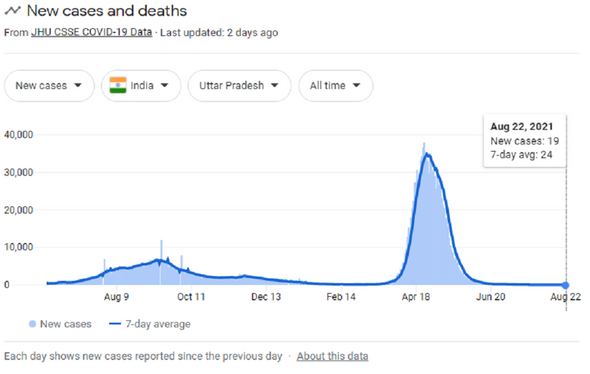 As you can see, COVID has been dead in Uttar Pradesh with the exception of a very brief six-week spike in the early spring. Uttar Pradesh likely would have been the first world experiment of what a given area would have looked like had they been taking ivermectin from day one before a wave hit. Unfortunately, hundreds of thousands of seasonal migrants fled Mumbai and other big cities when the Delta wave hit and all settled back in their villages in Uttar Pradesh, giving them the same spike that every other state got because those people were not on ivermectin. As the AP reported in mid-April, during the surge in Uttar Pradesh, many of these seasonal workers who work half the year in the big cities returned home to their villages. They were likely not taking ivermectin.

But when the state began distributing the drug to everyone, cases plummeted quicker and sharper than anywhere else we’ve seen in the world, and the gains have held for months with record low cases. Dr. Surya Kant Tripathi, head of the Respiratory Medicine Department, King George Medical University, Lucknow, told the Financial Express Online in April that the state began giving ivermectin to everyone who was in home isolation (rather than telling them to do nothing until they can’t breathe, like we do here in the United States).

They also avoided use of the odious remdesivir. “All trials are saying that this drug is not effective in the treatment of COVID-19, rather it is complicating and resulting in mortality of patients,” said Dr. Tripathi. “At so many centers, remdesivir trials were stopped. Also, remdesivir is costing minimum of Rs 5,000 per vial.”

Take a look at this comparison between the death curve in Uttar Pradesh and the curve in India at large: 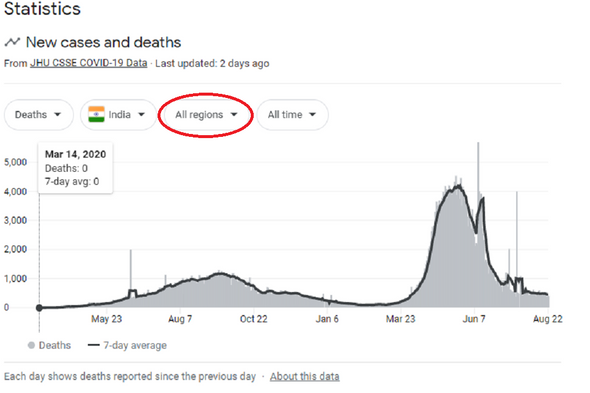 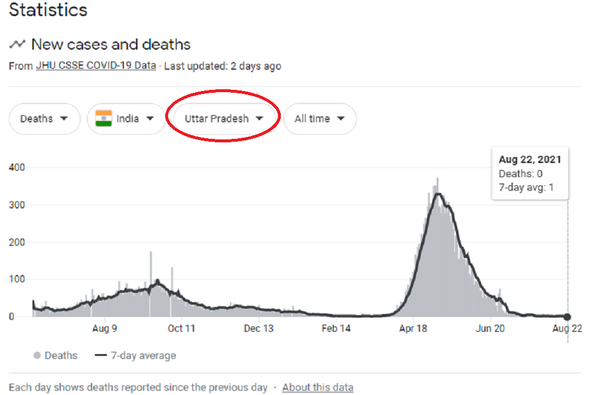 You will see that Uttar Pradesh experienced a plummeting of deaths more precipitous than India in the aggregate. Moreover, while cases and deaths in recent months have generally been pretty low in India because most people already got the virus, the pandemic is completely dead in Uttar Pradesh.

To put this comparison in another perspective, it took from May 9 to June 23 (45 days) for cases to decline 86% off the peak seven-day average for India at large. Not only did Uttar Pradesh peak earlier (April 27), it took just 30 days for it to achieve an 86% drop. By the 45-day window of comparison, cases in Uttar Pradesh had already dropped 98%. Today, it stands at 99.93% off the peak!

Now let’s compare this to the state of Kerala, which has removed ivermectin and other proven therapeutics from its treatment protocol and has gone all in on the ineffective remdesivir. Not only have cases not declined, but they have gone backward. 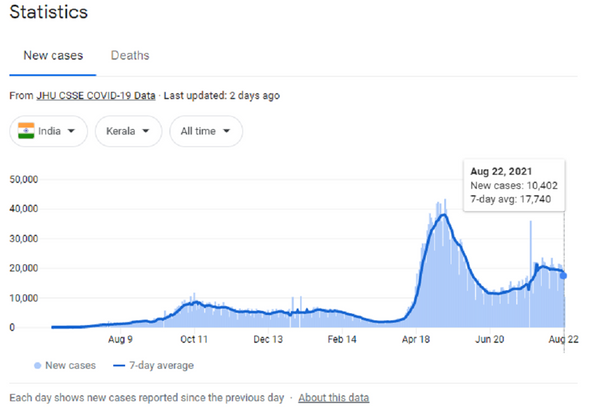 Remember, Kerala, at 34 million people, is just a fraction of the size of Uttar Pradesh.

Furthermore, just 4.5% of people in Uttar Pradesh are fully vaccinated, compared to 20% in Kerala. In this tiny state, already 70% of people 45 years and older and almost 56% of its population have had at least one shot.

Some might suggest that Kerala, being a southern state, is not a good comparison to the northern state of Uttar Pradesh because it is likely on a different epidemiological schedule. However, while Uttar Pradesh was the first state to use ivermectin, others have followed suit. Goa, which is a southern state, began offering ivermectin to all adults on May 11 and experienced a remarkable and durable decline. 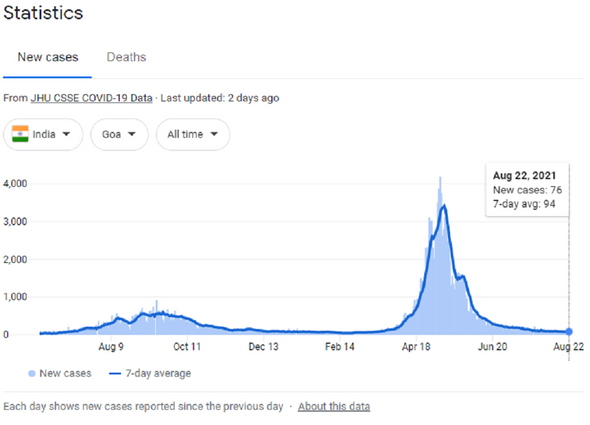 Thus, if anything, if we are to believe a government can force people to inject medicine into their bodies to stop the virus, governments everywhere would be following the science by a factor of 100 were they to mandate ivermectin rather than the vaccines. Everyone now agrees the vaccines do not stop transmission. The only question is how long the efficacy against serious illness lasts, for whom, and whether it broadly creates antibody dependent disease enhancement.

We already have dozens of studies vouching for the efficacy of ivermectin. While the establishment likes to complain about the sample size of each one individually, as one study published in Nature noted, “The probability that an ineffective treatment generated results as positive for the 55 studies to date is estimated to be 1 in 23 trillion (p = 0.000000000000043).” The story of Uttar Pradesh and the other Indian states that used ivermectin certainly demonstrates this.

Ivermectin was regarded as a “wonder drug” responsible for virtually eradicating river blindness in Africa. Given its robust anti-viral and anti-inflammatory mechanisms of action, Uttar Pradesh is a living testament that it could have been used to wipe COVID off the map as well. Sadly, the Western world would rather bankrupt us and cause more deaths for politically driven solutions that don’t work than cede back to the people the control they’ve established. Perhaps there is a lot we can learn from the third world, for we are now seeing the growth of a “fourth world” mentality that is much more destructive than the third world.