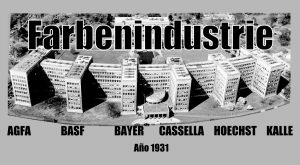 (Nogeoingegneri) The masters of historical falsification want us to believe that the whole tragedy of World War II can be traced back to a political leader with a despotic and deranged personality. This alleged madman, like a pied piper, is said to have been able to seduce millions of Germans to follow him blindly into the abyss.

The acts of the Nuremberg court of 1947/48 document that the Second World War was planned and prepared at the headquarters of IG Farben. The  IG Farben trial, (officially “The United States of America vs. Carl Krauch, et al.”) Was the sixth of the twelve Nuremberg secondary trials. The infamous cartel formed by Bayer, BASF and Hoechst was at the time the largest chemical / pharmaceutical multinational in the world. To consolidate its global monopoly in this field, the cartel funded the rise of the NSDAP and its preparations for the military conquest of Europe and the world. IG Farben directors maintained close contact with their political puppets. Since the end of World War II, dozens of books have been published that attempt to attribute the brutality and level of destruction of World War II to the mentality of the Germans and their susceptibility to the ideology of superiority. Could this explain the destruction of most of Europe?

The acts of the Nuremberg court document that the IG Farben executives were responsible for preparing the so-called “4-year plan” as early as 1936, 3 years before the start of the Second World War.

In every country conquered by Hitler’s army, IG Farben appropriated the entire chemical and petrochemical industry. The IG Farben / Nazi coalition plan envisaged three phases of incorporation: first, continental Europe; second, the United Kingdom and its colonies; third, the United States and the rest of the world.

Those who want to hide the historical reality try to convince us that the huge Auschwitz extermination camp was built, financed and maintained for the exclusive benefit of the SS. These death squads were presented as the intelligent minds behind this highly organized labor and extermination camp, which covered several square miles. Documents from the Nuremberg Pharmaceutical Court document that IG Farben transformed the Auschwitz concentration camp into a huge forced labor and trial facility. Hundreds of thousands of labor slaves were forced to build IG Farben, the largest industrial plant in Europe at the time including the concentration camp. funded by Deutsche Bank.

IG Farben director Fritz Ter Meer was sentenced in Nuremberg for genocide, slavery and other crimes against humanity in connection with Auschwitz.
Particularly evident are the lies about the purpose of the inhuman medical experiments conducted in the concentration camps.

The Nuremberg court records clearly show that the medical experiments conducted in Auschwitz and other concentration camps were authorized by the pharmaceutical departments of Bayer and Hoechst. The “drugs injected into tens of thousands of innocent prisoners were chemicals previously untested and patented by Bayer and other IG Farben companies. Most of the victims died during these cruel experiments. Just as IG Farben representatives were on Hitler’s staff, the chemical-pharmaceutical-petroleum sector lobbyists of the chemical-pharmaceutical-petroleum cartel are now in the White House and the EU Commission. This is also true of today’s heads of government.
“A handful of unelected EU commissioners have been given the power to run Europe,” says Dr. Matthias Rath,
President of the Rath Health Foundation, and they are turning all of Europe into a dictatorship of corporate interests using “terror”. More info: The Dark Roots of the “Brussels EU ” https://staatenlos.info/images/HitlersBanken/02/041-the-dark-roots-2.pdf

Also noteworthy is the efficiency of IBM in this period, which is not only very inspired by Orwell today.  An essay by Edvin Black published in 2001 talks about it, an essay that accuses the multinational of having favored the organization of concentration camps in Nazi Germany. Black’s book titled “ IBM and the Holocaust ” describes the role played by IBM in the census and deportations and shows how information technologies can have significant support in totalitarian systems.

Are we today in the final phase of a long-standing project?

The following article is already a few years old, but it deserves more interest today than ever.

There is a German doctor who dreams of a new Nuremberg. His name is Matthias Rath, and he has decided to bring all (or almost) the powerful of the earth to the dock. Not only the former president of the United States George Bush with his entire entourage (Cheney, Rumsfeld, Rice, etc.) or the Prime Minister of the United Kingdom Tony Blair, but also for example all the general directors, the top executives and the boards of directors of the pharmaceutical multinationals (Pfizer, Merck, Glaxosmithkline, Novartis, etc.), petrochemicals (Exxon, BP, Chevron, etc.) and the members of the financial groups that support them (Rockefeller, Rothschild, Jp Morgan, the Trilateral Commission, etc.).And then again the politicians from all over the world, the generals like Tommy Franks, the military, the health officials, the mass media, in short, anyone who has had, so to speak, their hands on the criminal behavior of this or that. An impressive list of names, all gathered behind a single very heavy accusation: genocide. Or, to be more exact, “genocide and other crimes against humanity perpetrated in connection with the pharmaceutical business of disease and the recent war on Iraq” (dated article).

Which is exactly the wording with which, last June, Dr. Rath sued them all at the International Criminal Court, the permanent court established last March 11 in The Hague, The Netherlands, which should (if it ever one day becomes operative: the United States, Russia, China and Israel have already reiterated that they do not even want to know) to assume the maximum powers in the pursuit of universal human rights violations. Taking it literally, it would practically have to throw half the world in jail. So the first thing to ask is: it will not be a bit exaggerated this Matthias Rath who says he speaks on behalf of the “People of the Earth”, who compares September 11 to the 1933 Reichstag fire(“Even that fact was immediately exploited to abolish civil rights and enact laws, such as that for national security, which gave more powers to the government”) and which he headed a foundation whose goal is to ensure “health for all by 2020”? Probably yes … ..“The pharmaceutical industry did not develop naturally. It was artificially created by investors (here the historical reference of Rath is the Rockefeller group at the beginning of the twentieth century, ed) who, in order to get rich with diseases, had to prevent the worldwide spread of non-patentable natural cures “. Like? “By lobbying and acquiring medical opinion around the world. By founding private medical schools such as the so-called “Ivy League” universities, from Harvard to Yale. Taking control of WHO and FAO since the 1960s. Fighting with the institution of the “Codex Alimentarius”… FULL ARTICLE