(EC) What if I told you there was a plan by rich and/or powerful organizations and individuals to shape the world as they see fit?

That’s just standard when you think about it. Governments do that. If you look into Caroll Quigley, you will see that outside of government people and organizations/groups influence governments to pursue agenda they want enacted. The CFR does this. It’s been going on for a long time.

What if I told you there was a documented plan to control people further? To implement greater and greater authoritarian control through governments? To silence alternative media? To lockdown free thinkers and outliers? And that this was to come about when an expected pandemic struck?

Well, it was written about in a document called Scenarios for the Future of Technology and International Development. And it was written by the alleged benevolent Rockfeller Foundation in 2010.

We are seeing the aims of this document come to fruition in 2020. It even spoke of a pandemic to lead to the outcomes they predict.

The most important part of the document would likely be the section called “Lock Step”, with the goal described as: 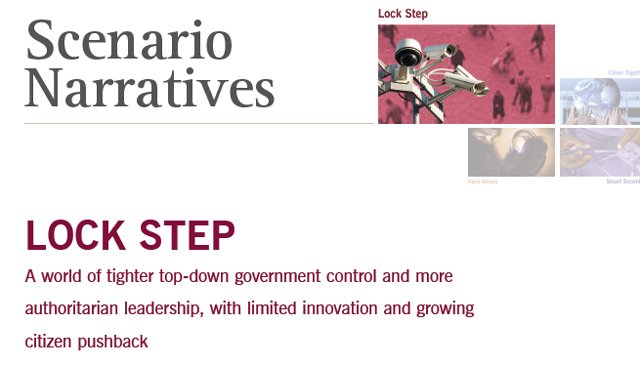 The first paragraph starts with:

In 2012, the pandemic that the world had been anticipating for years finally hit.

It then speaks of 20% of the world infected with 8 million dead in seven months. They praise the actions of one government above all: China.

However, a few countries did fare better — China in particular. The Chinese government’s quick imposition and enforcement of mandatory quarantine for all citizens, as well as its instant and near-hermetic sealing off of all borders, saved millions of lives, stopping the spread of the virus far earlier than in other countries and enabling a swifter postpandemic recovery.

Measures were put in place in other countries too. And the document states that these measures would never go away. They would remain, and would even intensify after the pandemic was over:

China’s government was not the only one that took extreme measures to protect its citizens from risk and exposure. During the pandemic, national leaders around the world flexed their authority and imposed airtight rules and restrictions, from the mandatory wearing of face masks to body-temperature checks at the entries to communal spaces like train stations and supermarkets. Even after the pandemic faded, this more authoritarian control and oversight of citizens and their activities stuck and even intensified.

That’s right. More authoritarian control and “oversight” of everyone, getting worse after the pandemic. That’s what has happened during the non-crisis artificial scamdemic for something akin to the flu in lethality. And it only got worse after the virus was fading in past weeks. Tracking, tracing and forced testing is on the way. Removing people from homes. Putting children into child protective services. Sending people to COVID (FEMA?) camps.

They recognized that people wouldn’t like the top down total control over life:

By 2025, people seemed to be growing weary of so much top-down control and letting leaders and authorities make choices for them.

So from at least 2012 to 2025 the post-pandemic total control was to be in place. That’s 13 years they had already foreseen this expanded control to last, at the least!

They plan to use technology to help them in their technocratic tyranny, of course, as the already are doing.

China is the model. That’s why the WHO praised their response. Authoritarian top-down control are the lockdown models for government authorities to use.

Get ready for more technocratic and rising scientific dictatorships. This is planned to go on and on. From Event 201 in October 2019 that went “live” the next month, all as Bill Gates “predicted”, to the next “Pandemic (scamdeic/plandemic) 2.0” that he projects next. In between these two lockdowns, we have the unrest (protests turned to riots) that governments respond to with more top-dpwn (lock step) control to keep people locked down.

All is going to plan. From one lockdown to another, round and round we go. Welcome to the boot stepping on the face of humanity forever.

SCENARIOS FOR THE FUTURE OF TECHNOLOGY AND INTERNATIONAL DEVELOPMENT