Since 1971, influential economist and transhumanist Klaus Schwab has hosted his annual hobnob winter retreat in Davos, Switzerland, for thousands of like-minded globalists and invited guests.

In its early years, Schwab focused his Davos affair on Europe’s place in the world, but in 1987 Schwab expanded his global vision, and the World Economic Forum was launched. Its complete name, “World Economic Forum, the International Organization for Public-Private Cooperation,” gives a better understanding of Schwab’s grand corporatist (fascist) sentiments.

Over the years, Schwab’s late-January confab has attracted a veritable who’s who of the world’s leading business executives, politicians, economists, financiers, academics, media moguls and environmentalists, jet-setting to the Davos slopes for discussions on all things global. Even President Donald Trump appeared to present his “America First” rebuttals to globalism in 2018 and 2020. 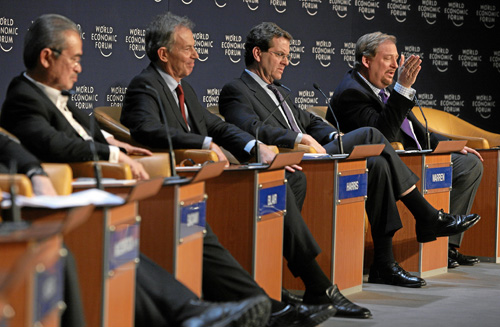 Pastor and author Rick Warren (right) remarks while seated on a panel next to fellow Council on Foreign Relations member David Harris, president and C.E.O. of the National Jewish Democratic Council, at the 2008 World Economic Forum. Seated next to Harris is former British Prime Minister Tony Blair.

Religious figures from around the world have also attended, including best-selling author and Council on Foreign Relations member Rick Warren. His book, “The Purpose Driven Life,” has persuaded many evangelical churches to steer away from traditional worship toward modernism, ecumenism and social service. 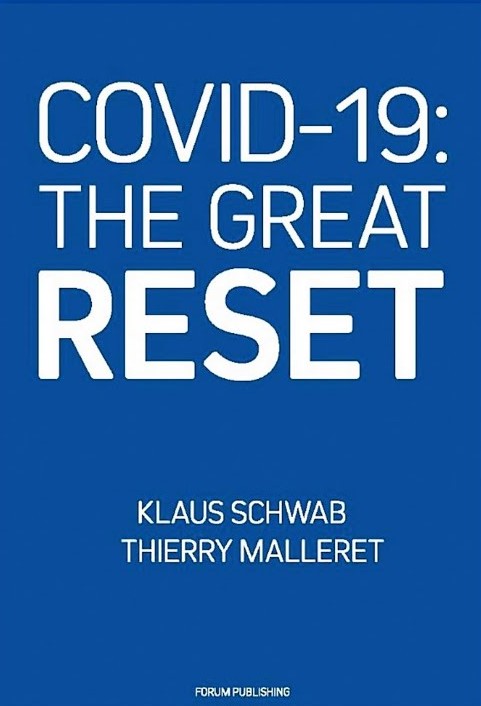 In the midst of the 2020 COVID-19 scare, Schwab released his book, “COVID-19: The Great Reset.” The book describes his ideas on how globalism can recover its mojo after incurring major setbacks the past few years, most notably by Trumpian and Brexit nationalism, and by the economic shutdowns, travel restrictions, border closings, and global supply chain interruptions during the COVID scare.

Transhumanism
Schwab’s audacious plans for the rest of us are not limited to those mentioned in his Great Reset. Garnering understandably the most sensationalist attention and criticism are his transhumanist views.

In a speech before the Chicago Council on Global Affairs in 2019, Schwab paraphrased a statement from the printed introduction of his 2016 book, “The Fourth Industrial Revolution,” an event which, he told the audience, “will lead to a fusion of our physical, digital, and biological identities.” 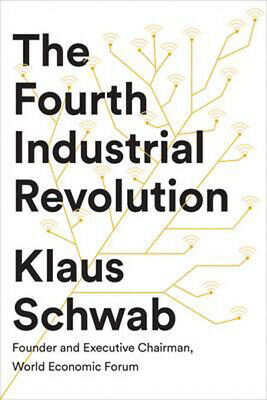 For those naive to the apocalyptic implications of that statement, Schwab had made it clear in a 2016 televised interview. Asked when the world would see chips implanted in humans, Schwab replied, “Certainly in the next ten years. At first we will implant them in our clothes, and then we could imagine that we will implant them in our brains or in our skin. And in the end, maybe, there will be a direct communication between our brain and the digital world. What we see is a kind of fusion of the physical, digital and biological world.”

“Smart Dust, arrays of full computers with antennas, each much smaller than a grain of sand, can now organize themselves inside the body….implanted devices will likely also help to communicate thoughts normally expressed verbally through a ‘built-in’ smartphone, and potentially unexpressed thoughts or moods by reading brain waves and other signals,” Schwab wrote in “The Fourth Industrial Revolution.” 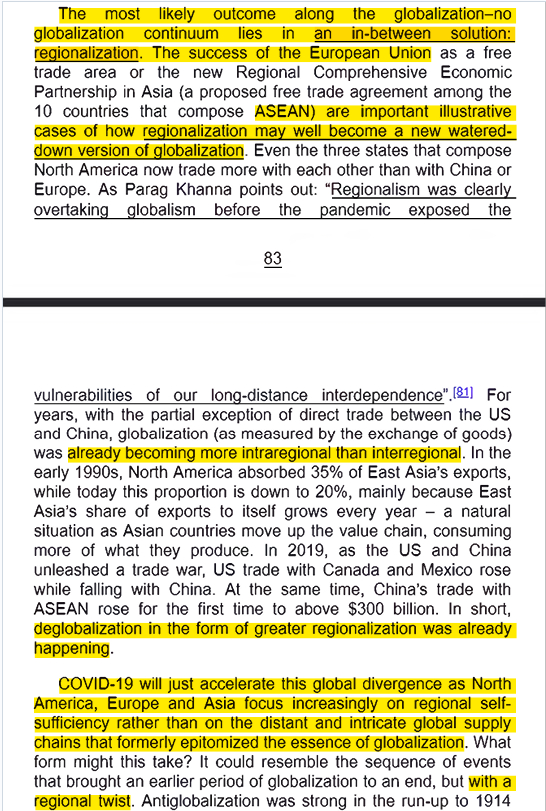 Regionalization
Public reaction to these audacious “in your face” ideas, by comparison, may appear to have buried some of Schwab’s other topics like “regionalization” into the obscure pages of his Great Reset. But regionalization should merit the audacious label in its own right, as its establishment would mark an unprecedented era in modern history, rendering national sovereignty obsolete.

According to Schwab, the COVID scare may well be the pretext to prompt regional blocs around the world, like the European Union, to assume regulation of their own regional supply chains. That would be their near-term compromise between globalism and nationalism. It supposedly would diffuse nationalist patriots within all nations by diverting their pushback against the overreach of global supply chain vulnerabilities and regulatory threats to national sovereignty that were obvious even before COVID.

So Schwab’s “new watered-down version of globalization” would be limited to national populations’ own regional neighborhoods, at least in the near term. Americans would no longer need to be concerned about being dependent upon products made in China, but they would have to settle on having the phrase, “Made in North America” stamped on those products instead of “Made in USA.”

But Schwab’s “pragmatic,” incremental approach toward world government through regionalism is certainly not a new idea among globalists. Some of their most extolled, Henry Kissinger, Zbigniew Brzezinski, Lincoln Bloomfield, Strobe Talbott, Richard N. Gardner, and Guy Verhofstadt, have all euphemistically stated that globalism would eventually come about only through the regionalization process, with its “institutions of limited jurisdiction and selected membership.”

It appears, then, that globalism’s major setbacks in recent years have not been unforeseen at all, but were factored beforehand into the more pragmatic regionalization approach to globalism. That approach matches the “Hegelian dialectic” method of “thesis-antithesis-synthesis” strategy that has been employed by every human manipulator from contract negotiators to despots throughout world history.

In this case, with the thesis (the still-current reality) being the nation-state, then the imposed antithesis (“way-out,” unsustainable opposite) has been overreached globalism in its current, chaotic state. That allows regionalization to be offered as globalism’s synthesis (solution) to which nationalists, by then beleaguered by globalism’s open-border chaos, theoretically would finally acquiesce. Two steps forward for globalism, one back.

Once regional governments get established and consolidate power, they could then merge into authoritarian globalism with minimal opposition.

The Secret At The Bottom Of Psychiatry’s Rabbit Hole

Speech Therapist: 364% Surge in Baby and Toddler Referrals Thanks to Mask Wearing

The Lilly Wave And Psychotronic Warfare…

HOW THE GRAPHENE NANO-MICRO BUBBLES WORK!