(LifeSiteNews) – A young Japanese woman began losing her hair one day after she was injected with Moderna’s COVID-19 vaccine and was almost completely bald a month later, a Chinese news source has reported.

More than 800 people have reported hair loss and alopecia following COVID-19 jabs to the U.S. government’s Vaccine Adverse Event Reporting System (VAERS).  VigiBase, the WHO global database of reported potential side effects of medicinal products, has logged 1,693 reports of autoimmune alopecia, mostly from the US and Europe.

The young Japanese woman, known as Ayapipipiii, posted a blog on the 31st of July, documenting her extreme hair loss following vaccination.

Ayapipipiii wrote that she received the first dose of Moderna’s experimental jab on June 29 and felt pain in her arm and weakness, but did not develop a fever. 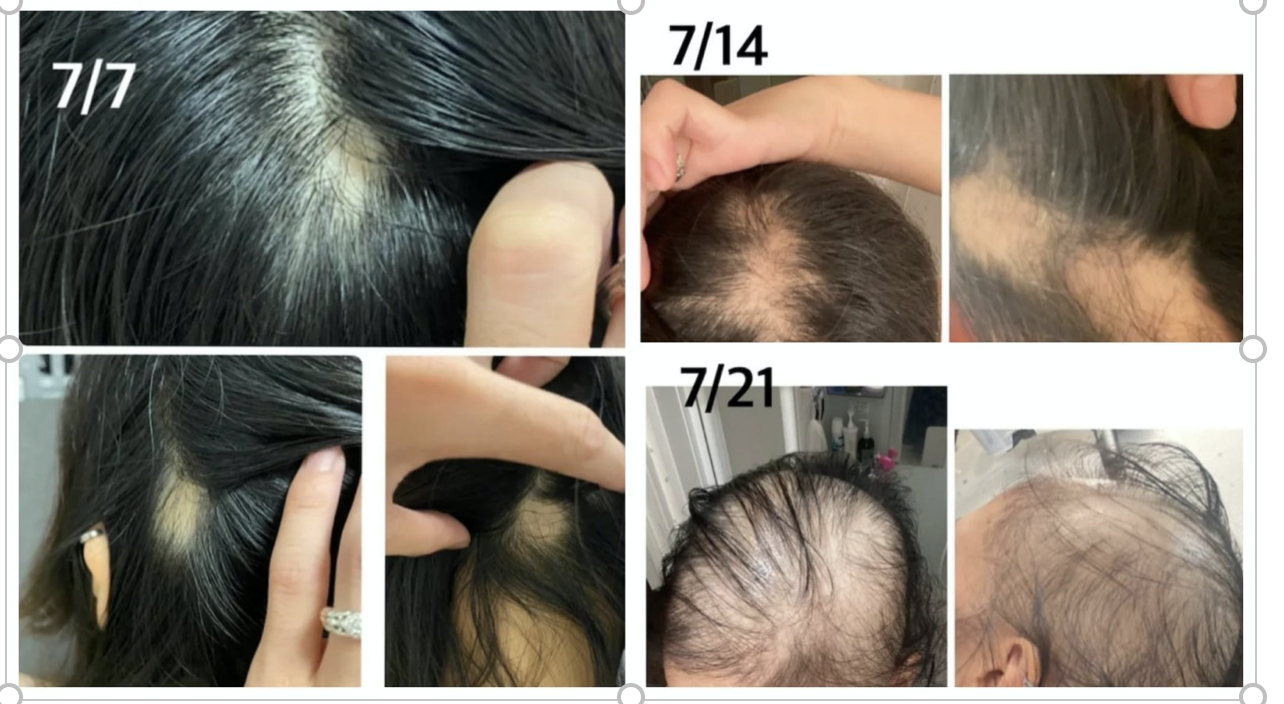 The following day, she noticed that she had lost a lot of hair and had developed a rash which she dismissed at the time as due to changes in the weather.

When she was washing her hair the following day, however, she noticed that the drain hole had clogged with hair and there was more of her hair on the floor. By July 7, just a little more than a week after her vaccination, Ayapipipiii photographed three round bald spots on her head.

On July 13th, she noticed when she awoke that her pillow was covered with hair. By July 17th Ayapipipiii described feeling the wind on her scalp for the first time in her life.

She sought medical attention on July 21, and by July 3, she was almost entirely bald. 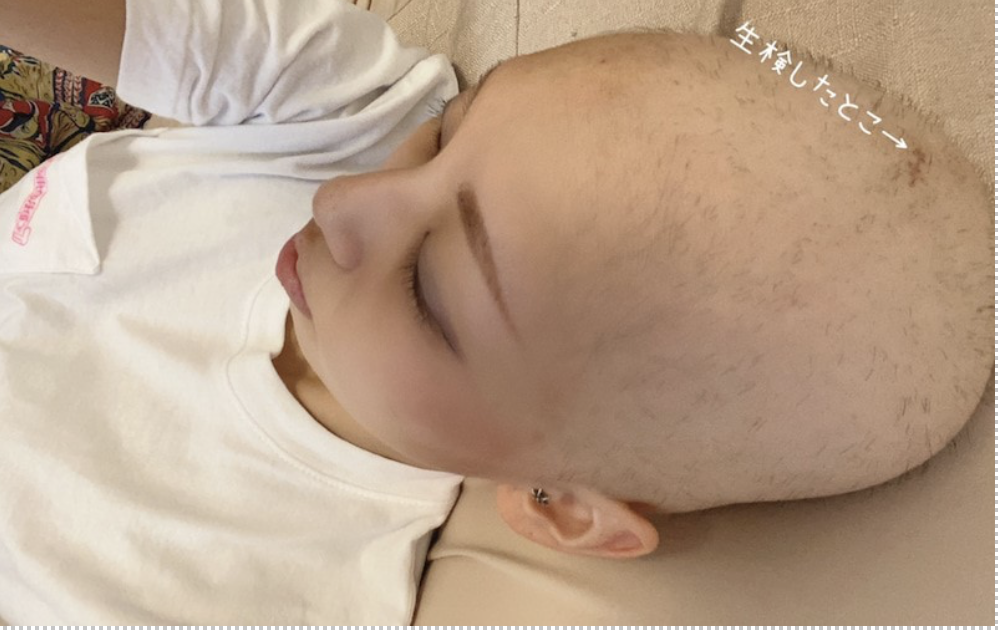 Similar reports of alopecia – an autoimmune condition affecting hair follicles – and hair loss are described with 846 reports on VAERS, including the following sampling:

A 51-year-old man from California describes how he noticed some hair loss after his first dose of Pfizer’s jab but lost all of his hair within a week of his second jab.

“DEPRESSION/ sadness with no head/ scalp hair, eyebrows, eyelashes. Dramatic change of identity. I am BALD and my family/ friends/ patients think I have cancer b/c I have a CHEMO HEAD/ SCALP.”

A 14-year-old from New Jersey was reported by her mother as “stressed out” after the girl began losing her hair. The mother first noticed a bald spot behind her daughter’s ear in June, 10 days after her first Pfizer COVID shot.

A 72-year-old ranch hand and cattle feeder from Colorado got his first dose of Moderna’s experimental mRNA injection and developed an immediate muscle soreness that “never went away,” causing daily, persistent pain in his left arm. After getting a second dose of the shot in February, he noticed his hair was thinning and then, that “his hair brush was full of hair, and he could literally run his hands through his hair and get a handful of hair immediately,” according to a VAERS report filed by his son. By May he was “completely bald.”

“He has always been a very excessive hairy man. He always could grow a full beard, mustache and side burns. He has always had massive belly and chest hair where there was no definite line between his chest hair and his beard. Hairy arms and legs, hair in his ears and nostrils,” his son wrote.

By the end of July, however, he had lost all but a portion of his eye brows and eye lashes. The skin on his legs was smooth and soft, “just like baby’s skin”

According to the report, a gentleman in the same small Colorado town as the ranch hand had the same reaction to his series of Moderna Covid-19 vaccine.

A 68-year-old woman in Florida wrote,“Tufts of my hair came out by the handful – first time in my life I have experienced ANY hair loss!” after receiving a first dose of Moderna’s COVID shot in April.

“It is still ongoing and I am worried it will result in permanent baldness.”

A 29-year-old Tennessee woman noticed about eight days after she received Moderna’s shot that her nursing baby’s hair started falling out. The baby had lost half of her hair within three weeks and was diagnosed with alopecia areata in April “without obvious triggers [other] than mother’s vaccination.”

The causes of alopecia areata (AA) which can lead to hair loss in spots, over their entire head, including eyelashes and eyebrows, or the entire body are unknown, but it is described as one of more than 80 distinct autoimmune conditions in which cells lose their “privilege” status in the body and become targets for a continuous deranged immune system assault. In the case of alopecia, it is hair follicles that are treated by the body as foreign invaders.

Genetics are thought to play a role in alopecia, as well. Some people are more disposed to the condition, but it doesn’t usually materialize without an environmental trigger. One VAERS report from a Florida man whose hair began falling out with “severe alopecia areata” one week after a Moderna COVID shot, stated that his brother was also experiencing new-onset alopecia two weeks after getting a COVID shot.

Alopecia has been linked to vaccination in multiple studies. The 2015 medical textbook Vaccines and Autoimmunity devotes a chapter to the subject and cites one study in which 60 people developed the condition following vaccination, 48 of whom had received injections against hepatitis B.

One case report describes a child who lost all of his hair within days of two different vaccines with regrowth in between the shots.

There are 2,253 reports of alopecia and hair loss related to all vaccines on VAERS since it began logging side effects in 1990; 846 of them are for COVID vaccine shots registered in the first eight months of its rollout.

Various vaccines contain either whole or weakened infectious agents, or synthetic peptides and genetically engineered antigens of infectious agents like the spike protein and adjuvants, immune stimulating ingredients such as the lipid nanoparticle casing in the mRNA vaccines, according to the medical textbook edited by Israeli immunologist Yehuda Shoenfeld, founder of the Zabludowicz Center for Autoimmune Diseases and author of 1,750 peer-reviewed papers in his field.

“They also contain diluents, preservatives, detergents and residuals of culture growth media (be that bacteria, bovine extract, monkey kidney tissue, or aborted baby cells) the safety of which “has not been thoroughly investigated and may not be inherently safe, as was previously assumed,” according to the text.

“What is obvious, nonetheless, is that a typical vaccine formulation contains all the necessary biochemical components to induce autoimmune manifestations.”

For some individuals, COVID-19 shots seemed to cause previous autoimmune alopecia to flare. One British woman reported that after eight years without hair due to the condition, she had had consistent hair growth since September 2020 and fully regrown hair. After getting a COVID shot in May, however, she wrote, “I have about 300 pieces of hair fall out a day; literally anything I do, hair falls out – I don’t even have to touch my head,” she reported.  She was shocked at the government’s advice to people with autoimmune diseases that the shots are safe and said she would not be taking a second dose.

“I have literally lost faith,” the woman said.

Another woman, a nurse from Texas, describes her alopecia being in remission for 5 months and having a full head of hair, only to see it slough off within 7-10 days of the shot, taking only two or three days to completely fall out, leaving a “slick bald head.” After taking a second dose of Pfizer, the nurse lost her eyebrows, eyelashes, nasal hair, and body hair as well and experienced “profound itching and tingling of skin on my abdomen, chest, arms and legs.”

In some individuals, hair loss was only one of a number of post-vaccine effects. A 25-year-old Hawaiian reported blood in his urine and hair loss following a first dose of Moderna, for example.

One 29-year-old New York woman’s healthcare worker reported her hair loss along with persistent joint and muscle pain, severe hypothyroidism, severe multi-system inflammation including kidney, liver, heart and thyroid as well as hands and no menstrual cycle for four months – symptoms that began five days following the woman having her second dose of Pfizer’s COVID jab and despite having all normal blood test results in the previous year.

This crisis abated in a few days and was replaced with fatigue and difficulty taking a breath and constant ear ringing, plus more hair loss.

“Absolute torture,” she wrote. “What a nightmare. This crap should not be given to anyone with an autoimmune disorder.”

Despite extensive research, alopecia is poorly understood and treatments are unsuccessful, so the condition is deemed “incurable,” according to a 2021 review paper.

“The disease impacts quality of life and has major psychological effects for men and women, especially in social acceptance and psychological well-being.”

VAERS reports do not confirm a causal relationship between the vaccine and a condition that follows. However, reports may also greatly understate the true incidence of vaccine side effects, as a 2009 Harvard Pilgrim Healthcare study found that VAERS only captures about one percent of reportable vaccine side-effects.

Moderna and Pfizer did not respond to an e-mailed request for comment from LifeSiteNews about reports of hair loss and alopecia following administration of their injections.